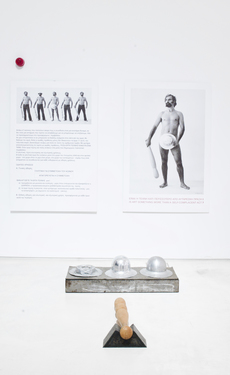 During the period of 1952-1957 he studies at the Athens School of Fine Arts under Michalis Tombros. From 1959 to 1962, he continues his studies with a state scholarship in Paris, at the Ecole Nationale Superieure des Beaux-Arts, while also studying metalworking at the Academie du Feu. Even from his student years in Paris, he is concerned about the relationship of sculpture with public space. During the Sixties he explores issues of plastic form, organization, balance and the scale of plastic elements but also the communicational nature of the art work. From the Seventies onwards, he develops his personal artistic language, comprising specific plastic forms (such as the matraque-phallus) and other expressive means such as language, image, sound, actions via which he forges his critical comments on art and the sociopolitical situation, but also via which he can involve the viewer.

The body of work Manipulations is an important point in his oeuvre which concentrates on the artist’s questioning of art itself, its social function and its commercialisation, the role of the artist and the public’s preconceived notions of art. In 1977 he inspired and organised the event Hypothesis for a Museum of Contemporary Art, at the Desmos gallery, where he stipulated the basic issues of art in the context of a contemporary society, and explored the basic infrastructure which determines art in Greece and elsewhere in contemporary society. In 1980 he is elected professor at the Athens Technical University’s Department of Architecture, a post he kept till 1998. He has co-written a plethora of theoretical texts via which he presents his viewpoint. 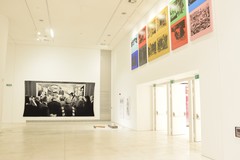 RECALIBRATING THE PUBLIC'S IMAGE This notion came to our mind when bringing together the work of the sculptor Theodoros, Wout Vercammen a