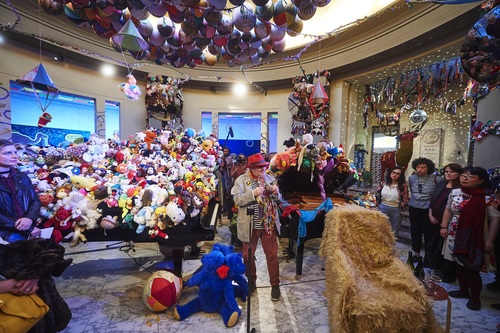 The New York-Brussels Charlemagne Palestine is a multidisciplinary artist who is not easily pigeonholed. He was part of the singular avant-garde and underground scene in New York during the sixties and seventies. Palestine is also associated with Fluxus, and artists such as Robert Filliou, James Lee Byars, Gordon Matta-Clark, Laurie Anderson and Philip Glass.

Renowned for his legendary performances and works with video and music, he is best known today for his impressive multimedia installations with plush stuffed animals, which, understood as total works of art, encompass all aspects of his artistic personality.

Charlemagne Palestine is a performer, musician and visual artist. As a musician he is part of the New York avant-garde and underground scene in the sixties and seventies. He becomes well known with his experimental compositions and performances. During the seventies he expands his art practice with sculptures and videos, and performs increasingly more often in the company of cuddly bears.

Palestine's work is situated in an extremely personal world that encompasses both rituals and shamanism. The plush teddy bears act as powerful shamanic totems; Palestine affectionately calls them divine beings. His fascination for toy animals stems from their soulless animism, which Palestine sees as an example of our current pop culture. He bestows upon them a certain status by elevating them to the level of fetish objects in his performances. In this way, Charlemagne Palestine sacralises the everyday and distances himself from the academic, formal and intellectual tendencies in Western art and music. 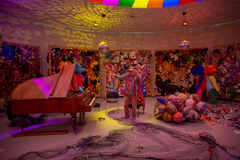 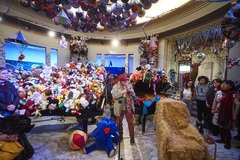 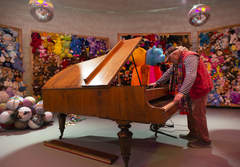