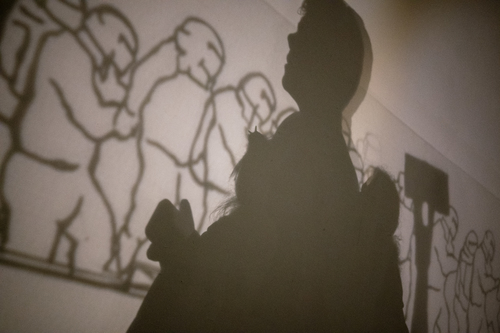 Ekaterina Muromtseva (Moscow, 1990) studied philosophy and then took painting and drawing at the Rodchenko Art School. After that she also went on to study photography and video art, with a special focus on documentary work.

Since her first solo exhibition in 2015, the international interest in Muromtseva's visual work has largely increased. She is regarded as a multi-faceted, politically-minded artist with a great sense of social commitment. Muromtseva paints in watercolour, creates compelling videos and carves characters out of wood. In her spare time, she also teaches art to the elderly, with whom she likes to talk about the Second World War and the death of Stalin.

In her compositions and installations, Ekaterina Muromtseva combines the present with the past, sometimes with intelligent humour, at other times with ironic grimness, yet always with much bravado. The fact that 'the new Russia' is still struggling with finding its democratic equilibrium, does not imply that the westernization (since the glasnost and perestroika of Mikhail Gorbachev) has had no influence on the cultural liberation of the country. At the heart of her oeuvre lie the ghosts of the past which Muromtseva seeks to give a place in the present. She explores the Soviet Union's dark past so as to shed light on Russia's new present.

Ekaterina Muromtseva's work Quarter to Twelve is a room-filling installation in which drawings on transparencies are projected onto three walls using projection equipment and light bulbs. This creates a shadow play of moving images of a series of figures, mechanisms and animals. The figures overlap or flow into each other, creating in this way a sequence of scenes about life. The depicted parade is constantly in motion, moving with the social rhythm and the rhythm of history to 'the music of the revolution'. Resounding through it all as an echo from the past is the poem The Twelve by the Russian poet Aleksandr Blok, the first Russian literary work about the period after the revolutions in the beginning of the twentieth century. Quarter to Twelve deals with the feeling of collective expectation and the permanent cycle of change. The revolution is changing from a radical movement to a progressive one, mirroring the transition from a post-industrial society to a network society.

This exhibition is part of the ‘Present Continuous’ project, a structural cooperation between M HKA and V–A–C. 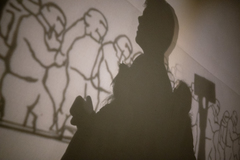 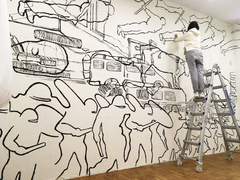