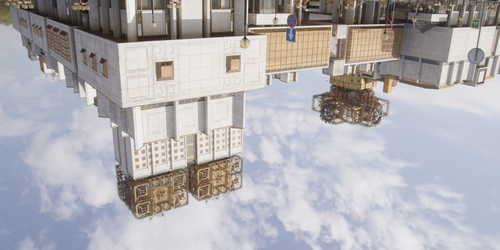 Dimitri Venkov is a visual artist and filmmaker whose works deal with the historical and political landscape of Russia and beyond. His distinct, even idiosyncratic approach to making films is reflexive of well-established image-making genres, from documentary to science-fiction, all-the-while possessing a certain poetics and poignancy. Each work is the result of long-term research processes, leading each time to films with distinct personalities. Yet we can see ongoing concerns, such as those to do with the effect of politics and ideology on society, and of existence in the modern city including at the level of the individual. For his solo exhibition at M HKA, Venkov presents four films from recent years that form a kind of ‘quatryptich’. They are conceptually linked through the idea of what Venkov describes as a “reduction of the means of expression”, referring to a progression from the intricate narrative of the earlier works to the paired-down musical structure of the later ones.

Chronologically-speaking, the films Mad Mimes (2012), Krisis (2016), The Hymns of Muscovy (2018) and The Shining Will Come Crashing Down (2019) move from formal complexity to simplicity. Mad Mimes, the film that brought Venkov to wide attention, is a faux-anthropological study of a fictitious cult in a commune next to the Moscow Ring Road, who survive on roadside detritus. Krisis (2016) provides a live-action reenactment of a Facebook discussion between Russian and Ukrainian artists, reconstructed as a kind of trial following the statue of Lenin in Kiev being torn-down during the Maidan protests. The Hymns of Muscovy (2018) presents a journey through the planet Muscovy – the upside-down twin of Moscow, capturing the architectural styles of Moscow in relation to electronic variations on the musical score of the Soviet and Russian national anthem. His new film The Shining Will Come Crashing Down is a volleyball game treated in musical terms. Photographed with a high-speed camera the sweeping gravity-defying performance of the players becomes a gamut of tones and temporalities akin to those in the toolbox of a composer. The presence of gravity acts a traveling-companion in these works, both aesthetically as a visual adversary, but also metaphorically to describe the gravity of our current social, political and environmental predicaments.

Dimitri Venkov lives and works in Moscow, Russia. His works have been exhibited at Documenta 14 in Athens, and the biennials of Moscow, Bergen, and Gothenburg respectively. He has been awarded numerous prizes such as the Kandinsky Prize, The International Federation of Film Critics Award (FIPRESCI) and the 4th Oberhausen e-flux prize, amongst others. Venkov holds a Master of Arts degree in film history from the University of Oregon. His film Krisis was acquired in 2018 for the M HKA collection.

The IN SITU offers medium-scale monographic exhibitions by significant early- and mid-career artists from around the world. It focuses on the commissioning of new artworks and experimental practices in what is M HKA’s largest and most atypical exhibition space. The IN SITU programme is led by Nav Haq, Senior Curator at M HKA.