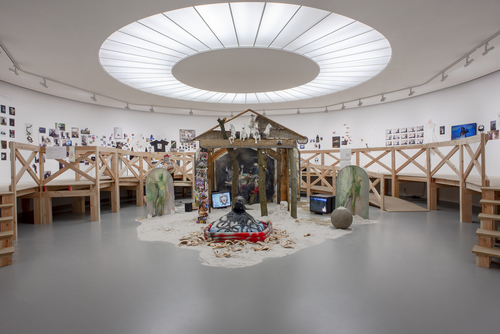 The artist collective North-7 started in 2013 as an independent ‘research base’. It is an artist-run space, founded by several friends and schoolmate in a basement in the centre of Saint Petersburg. These past seven years, the group has migrated across the city, changing its locations and initiating different long-term artistic projects, which have involved participants from the local community. As a collective, North-7 does not have strict borders. It remains open to collaborations and cannot be defined. As such North-7 can be considered a research base / art group / collective / partnership / family of artists.

Performances play a crucial part in the artistic practice of North-7. However, they also experiment with different art forms in varying media. The artists examine themes such as identity and politics, without conforming to existing rules or intellectual trends.

North-7 also works with a concept of ‘locality’, not as immersion into local mythology, but as an estrangement from the ‘local state of mind’ with its provinciality and generality, while using fears and obsessive images, introversion and inner potential to redefine itself. As a form North-7’s practices are rooted in absurdist poetry with images that grow from an ‘architecture of words’, self-destructing structures of ‘floundering signs’.  The artists often rely on buffoonery as a concept in their performances and other art forms, much like a ‘bad joke’ which reflects a situation where social ‘reality’ (or rather social phantasm) beats any irony, any imagined witticism.

Lost & Found North-7 Expedition is a non-existent museum in the form of a classical ruin, such as a temple or a theatre. The installation was created for M HKA and holds documentation on and an archive of all past artistic projects and activities carried out by North-7. The installation takes the form of an archaeological dig and resembles an outdated provincial museum, which presents an eclectic range of artefacts in a non-linear, often symbolic manner. 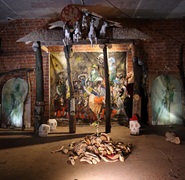 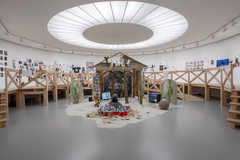