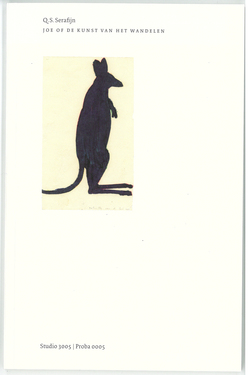 In the summer of 2006, Q.S. Serafijn stays for a long weekend in Hotel De Wageningse Berg to prepare his contribution to The Art of Ambling/ Elfbergenpad. That summer, the hotel has a number of weekend packages on offer, such as the Happy go Lucky Arrangement and – in the context of four hundred years of relations between the Netherlands and Australia – the Australia Arrangement. Serafijn opts for the Australia Arrangement. Aside from a dinner and two breakfasts with an Australian twist, a surprise awaits Serafijn in the hotel room. That surprise turns out to be a more than two meters tall living kangaroo, a companion kangaroo. Initially quite displeased with the unsolicited presence of the beast, Q.S. eventually decides to walk along the Elfbergenpad in the company of Joe. During the walk, they discuss things like the Dutch light, the sense and nonsense of art, the importance of ecology and the kangaroo policy in Australia. At the end of the walk, an unexpected finale awaits the two hikers. Come and be seduced by the adventures and elegance of the conversations in Joe Or The Art of Ambling.

Joe Or The Art of Ambling is part of the project The Art of Ambling/Elfbergenpad. The stories and soundworks of this project are meant to add an extra dimension when walking through the landscape of the South Veluwe. Participants: Æ Kliest & Jan Goorissen; Q.S. Serafijn & Spinvis; Dirk van Weelden & Cilia Erens; Rosanne van Klaveren & Hooykaas/Stansfield; Armeno Alberts & Yvonne Dröge Wendel. The Art of Ambling/Elfbergenpad is a project of the Wolf Foundation and was realised in cooperation with the CBK Gelderland, the Veluwe Office of Tourism and Region VVV VeluweValley. The project is funded by the Province of Gelderland (Ministry of Economic Affairs and Culture), the municipalities of Ede, Wageningen and Renkum. The publication Joe Or The Art of Ambling is a private edition that accompanies the Daytrip B in the series Het Elfbergenpad, which also contains the CD with the sound work of Het Hertenkoor … (een wandel sprookje) /The Deer Choir … (a walking tale by Spinvis. 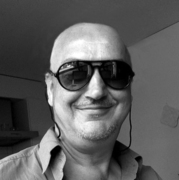