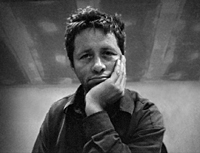 Belgian visual artist Koen Theys (Brussels, b. 1963) is a key pioneer on Belgium's contemporary video art scene. Having teamed up with his brother Frank Theys in 1989, he was also a driving force behind the founding of ARGOS, the centre for new media art in Brussels, which has since that time developed into an internationally renowned platform for video art and new media. During his studies in sculpture at the Royal Academy of Fine Arts of Ghent (Koninklijke Academie voor Schone Kunsten in Gent) in the early 1980s the focus of this young visual artist increasingly shifted to the realm of audio-visual media. The result was his scandalous video installation, Crime 01, in 1983. The video films the artist hacking the head off a dead German shepherd to pieces with an axe, later arranging the dog's limbs around a baby reclined in a white baby bouncer. The as yet unknown filmmaker was summarily expelled from the Academy; however, the montage served to herald the beginning of a maverick and provocative oeuvre. This oeuvre homes in on the most bizarre and diverse vestiges of the wider cultural spectrum. In addition to video installations, Theys also creates monumental visual work, sculptures and photo collages and is engaged in performance art. At the same time he is a professor of autonomous video art at the St Lucas School of Art and Design Antwerp, a department he was responsible for having started in 2004.

Following the sensational scene with the German shepherd (in reference to Adolf Hitler and his dog), Koen Theys filmed the video Diana in 1984, drawing his inspiration from the somewhat surreal film images of a nude Eva Braun at a waterfall. He alternates between these and other references to world history and video installations evoking icons from art history. In this way he creates compilations that include images of Pablo Picasso, Wellem van Aelst and Frans Hals, among others. As a multi-media artist, he also frequently sources YouTube videos and images found on the internet. For the opening of his retrospective exhibition at S.M.A.K. he contrived the Death Fucking Metal performance, where thirty ageing rock stars lie asleep amidst their instruments on a large rotating stage. In 2018 he created the Diasporalia sculpture in The Cathedral of Our Lady Antwerp. This sculpture consists of twelve bronze mattresses that serve as a display for the personal belongings of refugees.

The versatility of Theys’ pieces not only evidence exceptional social commitment, but also display an overwhelming sense of empathy, humour and a unique perspective on matters that appear trivial or commonplace. He consistently brings these together and transforms them into remarkable exhibitions. His video collection, The Many Things Show, which belongs to M HKA's permanent collection, is exemplary of this practice. This video/film inundates the viewer, like an iconoclasm, with thousands of anonymous portraits. The portraits are copy-paste images of people posing ostentatiously with a personal object, one chosen to stress their identity. The artist has these parade past to the beat of the inspired philosophical essay by Joseph Kosuth (Art after Philosophy, 1969) on the conceptual meaning of art. For those who cannot keep up with the stream of images, Theys has provided giant sheets of paper with identical images, accompanied by handwritten copies of Kosuth's essay.

Koen Theys uses the medium of video in this case to have the viewer observe his art as he or she would normally watch television, in this way issuing commentary on the power of popular media that rapaciously focusses on the kitsch and sentimental. The artist directs his focus on the anonymous individual who is swallowed up by the masses, a process rendering him or her invisible. By illustrating this phenomenon using the medium of television, Theys creates a striking paradox.

The Many Things Show 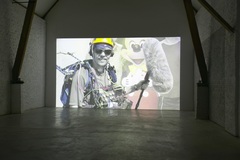 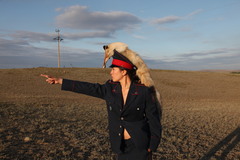 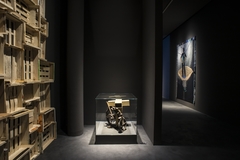 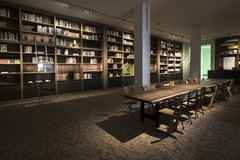