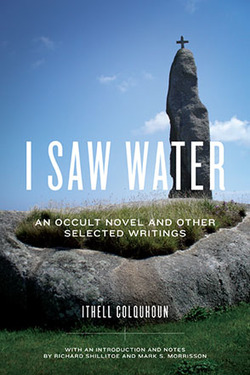 Unpublished during Ithell Colquhoun's lifetime, I Saw Water has now appeared in print, in a scholarly edition with introduction and end notes. Composed almost entirely of material assembled from the author’s dreams, I Saw Water challenges such fundamental distinctions as those between sleeping and waking, the two separated genders, and life and death. It is set in a convent on the Island of the Dead, but its spiritual context derives from sources as varied as Roman Catholicism, the teachings of the Theosophical Society, Goddess spirituality, Druidism, the mystical Qabalah, and Neoplatonism.

Working notes demonstrate the extent to which Colquhoun’s dreams provided the source material. She began work on the novel in about 1967, selecting dreams from her dream diaries from as far back as 1939. In the sense that she selected, edited and re-arranged her dreams, I Saw Water is a collage novel, comparable in certain respects to the collage novels of Max Ernst.