Notes from the Invisible Box of Valery Osser 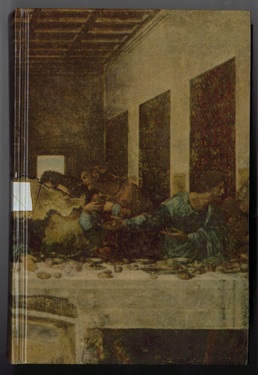 Literary synopsis *Notes from the Invisible Box of Valery Osser* is a "lost chapter" to *The Da Vinci Code* written by Trong Gia Nguyen, in which the artist Marcel Duchamp has been integrated into the main storyline. The entire Dan Brown novel was scanned in with the page numbers, titles, and authorship digitally removed. The entire book was reprinted with Nguyen's chapter added after Chapter 79, and only the sides of Nguyen's extra 12 pages have been gilded. Narrated from the perspective of Duchamp's diary entries, Nguyen’s text inserts the artist in the role of Priory of Sion grandmaster and alludes to, among other things, a love story between Duchamp and a young Brazilian actress by the name of Valery Osser, who in turn becomes the inspiration for Rrose Selavy – Duchamp's alter ego and the perfect model for the novel’s "sacred marriage between masculine and feminine." The two main symbols in *The Da Vinci Code*, the rose and star, make appearances in the real life of Duchamp. The former as the aforementioned Rrose Selavy and the latter in an unusual Man Ray photograph from the 1920s titled *Comet*, depicting Duchamp with his head shaved. Furthermore, the “grandmaster” –secret keeper of Christ’s bloodline– in *The Da Vinci Code* is mirrored with the highest “grandmaster” level in the game of chess, for which Duchamp was an expert player. In a twist of the bizarre where reality and fiction blur, Valery Osser (an anagram of Duchamp's alter ego) is in fact a real actress from the 1930s whose obscure movie credits include a film titled Blood Rose. Relation of the novel to the artist’s practice Numerous ideas –old, new, made up, and extant– are propositioned in Notes from the Invisible Box of Valery Osser, including the hypothetical sublimation of Leonardo's *Last Supper* in the form of Duchamp's *Large Glass*, or *The Bride Stripped Bare by Her Bachelors, Even*. Each cover to Nguyen’s “book art object” is distinct and unique, revealing another connection in an ever-expanding web of “magic realist” considerations. *Notes from the Invisible Box of Valery Osser* is linked to various other art projects, but is a singular work in itself. Some of the ideas presented in Notes will foster the development of new work. Many of Nguyen’s works have some type of literary inspiration or grounding, so “novel as medium” is one logical extension. [Novel website](http://www.cameandwent.com/notes_valery_osser.html) 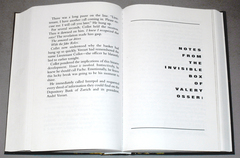 'Notes from the Invisible Box of Valery Osser' inside view 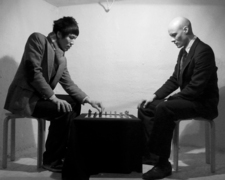 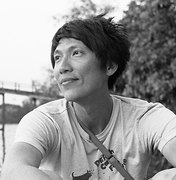