The Hunter in the Armchair 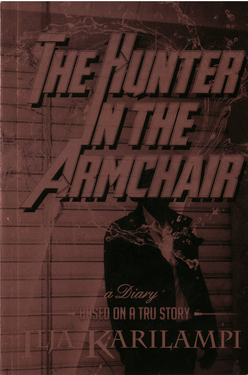 Literary synopsis *The Hunter in the Armchair* takes the form of a blog-cum-diary recorded by Swedish artist Ilja Karilampi over a five-month residency in New York City. The novel comes together as a sort of mixtape – a series of uncensored events, outrageous adventures and blessings, where reality becomes the most zany sort of fiction. These are the firsthand experiences of Karilampi himself, set to a slick soundtrack of club bangers and house party anthems. A foreigner’s broken Euro-English lingo captures this window in time from a distinctive P.O.V. Ilja Karilampi’s work is a visual portrait of blog-entries that dive into the intoxicating pool of celebrity culture and VIP lifestyles, with a dash of the ghetto fabulous. Written up in his own mixed-up jargon, it is a hopeless quest for male cultural identity by a man lucky enough to get laid once in a while, but not so lucky to get a job. Leaving home to head out on the hunt for visions and experiences, it seems contemporary man is never satisfied. Art, sex, drugs, food or simply a walk around the block: all stimulants and pacifiers for the young, irresponsible and free. The point of it all lies somewhere between psychology, quantum physics and esoteric philosophy, while synchronicity can be used to describe the random, poetic circumstances that make up the scope of the everyday allure of New York City. Relation of the novel to the artist’s practice In words of the artist Ilja Karilampi: ''I feel the book is an extension of the smaller narratives I have been making in the last years as the conceptual and contextual spine of my aesthetics. The book plays with the importance of a printed novel, as a pseudo-author, of its own existence. It also contains loads of ideas, images, objects, and inspiration for past and future work. So in a way it is something to look into for a long time, a motor of some sorts. Since it is reality as fiction, in some way it honestly depicts my own lifestyle and ideals as an artist. The language is also something that can be seen in my art work; spelling mistakes, slang, broken Euro-English, etc. Of course the collaborative cover itself is also an attempt to push and tweak graphic design and the expectance of what a book should look like''. [Novel website](http://moravabooks.com/en/mrv13)