The System of Landor's Cottage : A Pendant to Poe's Last Tale (Ed.2) 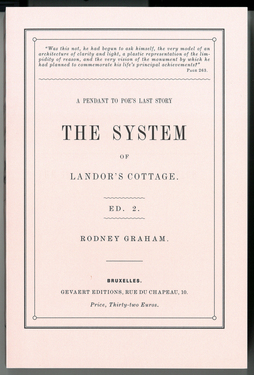 The System of Landor’s Cottage is an appropriation and extension of Edgar Allen Poe's last published story from 1850, Landor's Cottage, from its original ten or so pages to more than three hundred. Poe’s short story consists almost entirely of description. The narrator wanders an idyllic countryside and becomes lost, stumbling upon a cottage in a valley. The theme of the literary pendant or extension is central to Graham’s concept in The System of Landor’s Cottage. He presents the work as a pendant to Poe’s original and extends the first story with a lengthy description of an annex to the house described by Poe. The architectural extension is a metaphor for the literary supplement. This addition is inserted into the original narrative rather than following at the end, and is so much longer than the first story that it threatens to overwhelm it.

Graham's book is part of a larger work, also titled The System of Landor’s Cottage, which includes an architectural model, drawings and a 'dummy book'. The work was at the centre of Graham's first solo exhibition in a public museum, curated by Philip Monk for the Art Gallery of Ontario. The AGO co-published this title and also produced a leather bound version in an edition of four. "In following a guiding architectural metaphor, I have tried to fabricate the text by means of a kind of readymade rhetorical style" said Graham of the work. He would continue the themes of implied endless expansion and interpolation ("a device used to extend what would normally be a regular phrase into an irregular and extended phrase") on his next work, the brilliant Verwandlungsmusik.