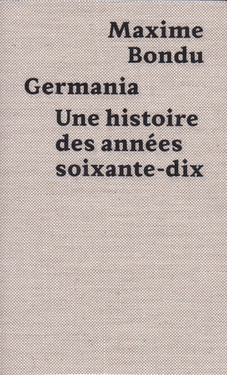 The process of writing Germania, une Histoire des Années Soixante-Dix starts with a coincidence: the announcement of the death of Phillip K. Dick and Georges Perec on the same page, recto verso, in a French newspaper – ‘Liberation’ from March 5th 1982. Germania is a throwback to the original text Les Choses by Georges Perec. The novel slips into an uchronia where the context, temporality and character names are changed. It describes a young couple in Berlin, in the victorious Nazi empire during the 1970s. This uchronia is a reinterpretation of the book, The Man in the High Castle by Phillip K. Dick.

In his work, Maxime Bondu questions the idea of writing and reading of history, past as future, and the place of the fiction by using discoveries, missing parts, mimetic gestures or deductions. Germania is part of an installation, called ‘5 mars 1982,’ which creates fiction from a coincidence with an historical background. With this project, a discovered fact makes possible a gesture and a thinkable story by using a conceptual jump. ‘5 mars 1982’ is formed by a copy of Germania, an archive ’Liberation’ newspaper from March 5th 1982, and a 1:35 scale cement structure in a mock salon setting. The ’Liberation’ paper is presented in a two way frame where the recto/verso of the newspaper layout can be seen juxtaposed on one another. The newspaper itself contains articles that includes the announcements of two separate deaths. One of Phillip K. Dick, American science-fiction writer, an the death of Georges Perec, a French writer, member of the Oulipo, known in his grammarical deconstuction that provide the prinicipal structure in his writing. The book Germania in the exhibition,is edited and disposed in the exhibition space to be read. The 1:35 scale concrete sculpture was based on the «Schwerbelastungskoerper» archectural diorama built by Albert Speer in 1941 to probe the resistance of the sandy soil of the city of Berlin. It is a large concrete cylinder built to study the feasibility of constructing a massive ‘arch de triomphe’ on the site. Some experts now believe that this «new Berlin» would have collapsed in the seventies. However, the scale model sculpture in the installation acts as a new fictional point of entry to the new Germania narrative. 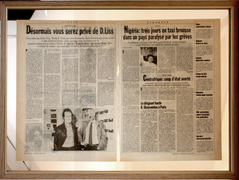 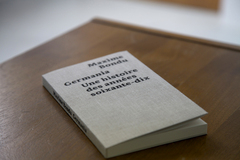 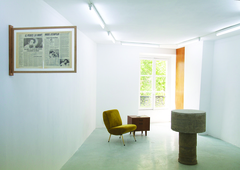 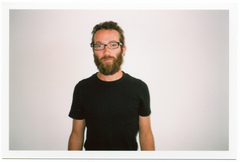