The force that drives Filliou’s work and thought is Permanent Creation. He helps to establish various Centres of Permanent Creation, such as the Poïpoïdrome and the Smiling Cedilla. As an alternative to the notion of the avant-garde, he proposes the Eternal Network, also known as ‘La fête permanente’.

RF: This is very important. There’s a reference to ‘The Smiling Cedilla’. Under ‘Eternal Network’, since this is a dictionary, I think we should begin with the definition that George and I gave it. By the way, we then decided also to reuse it at the exhibition in Paris. ‘There is always someone asleep, someone awake.’ We leave that in English. ‘See “The Smiling Cedilla”.’ There will be the poster. There will be ‘George Brecht and Robert Filliou’.

Then I would add, if you think it’s good, that we noticed a few years later that people, young artists we didn’t know, mainly in Canada, groups like the Imagebank in Vancouver and General Idea in Toronto and WORKS in Calgary, etc., were considering their activities manifestations of the Eternal Network. In 1973 I decided to go visit these Canadians, whom I’d been corresponding with.
I went to Canada. I met them, and when I returned, my presentation on the occasion of ADA [Aktionen der Avantgarde] in Berlin [in 1973] was Research on the Eternal Network. I presented a bunch of documents about the activities of those groups, those people I’d met. In particular, I proposed that the Eternal Network could effectively replace the concept of the avant-garde, which we considered obsolete, dated.
We can then have the text about Poincaré, etc. I’ll give it to you before you leave. I have to find it. I have the catalogue; I have everything for ‘Research on the Eternal Network’. There were many other things as well. Others will appear, for example under ‘Telepathic Music’. We’ll see about that. You know the first text for ‘Research on the Eternal Network’.

IL: In the beginning, in 1968, when you wrote this short text, was it only a concept?

RF: See, we realised people were using it. Now it’s already used so much in the whole world, without exclusivity of course, and mainly by people in Canada or the United States, various groups. I just received mail from Toronto, where there’s even a publishing house called The Eternal Network.
Both George and are reusing the concept. George, for his part, uses the concept of Eternal Network whenever he feels like it or has the opportunity. For example by writing ‘The Eternal Network Presents…’ when he presents one of his illustrations of the Gibbs paradoxes. And also on his latest postcards. Me too, on my latest invitation in Paris. We decided to use it like that. We’re working on a second volume on the Cedilla, because it goes on even if it doesn’t have its seat in Villefranche. We’ve already decided that the title would be The Eternal Network Presents: The Cedilla Flies Over. We consider our own activities part of the Eternal Network.
For the youngsters in Canada, certain things like Fluxus have been important. Like Ray Johnson’s New York Correspondence School, which they referred to very often. They considered that part of the activities of the Network. When they celebrated Art’s Birthday, they also presented themselves that way, on 2 February 1974. I must find one of these publications by this publishing house to show you. Under ‘Art’s Birthday’ and ‘Eternal Network’.

How did the Eternal Network come into being? Robert Filliou and George Brecht close their artist space La Cedille qui Sourit, located in Vill 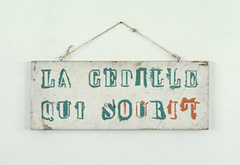 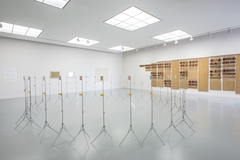